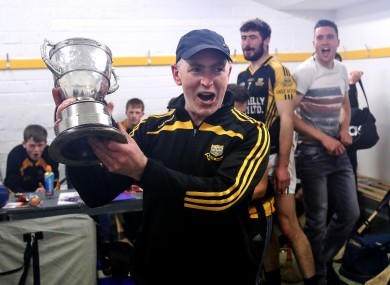 Published: over 5 years ago

ROBBIE HOGAN, the man who guided Ballyea to unprecedented success this past magical season, has stepped down as senior team manager due to work and family commitments.

Only last Friday week Hogan led the club into Croke Park as Clare and Munster senior club champions, the first time the club had claimed such honours.

But  at the All Ireland final homecoming last Saturday week in Drumquin, Hogan strongly hinted that he could be stepping down, saying that “five years, two months and 17 days is a long time” in any position. Indeed, Hogan needed to be strongly persuaded by  the players as well as the executive to stay on for the 2016 season and although each party tried their luck again in recent days to coax him to remain on, Hogan, a self-employed tiler who will have three children in secondary school in the autumn, informed club chairman Pat Moylan over the weekend that he could not give a sixth season to the role.

“I would like to thank Robbie so much for the five and a quarter years of outstanding dedication and professionalism to the position and for being such a gentleman to deal with,” said club chairman Pat Moylan. “He has left the team in a far, far better place than he found it and for that we will be eternally grateful.”

Senior Hurling Groups after Round 3

Best of luck to Ballyea’s 3 teams &amp; management in act...

Congratulations to our u 13 a academy team who won the ac...

Reminder u13 Academy A Final (Replay) this eve

Please come along to ClareAbbey pitch for 7pm this evenin...

The replay of the u 13 a academy championship final will ...